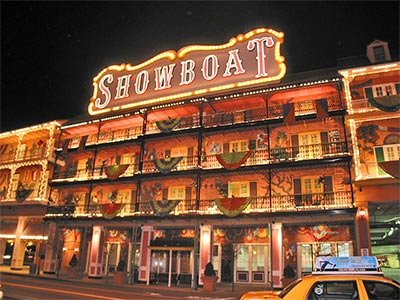 Feelings of betrayal are particularly acute amongst the staff of the Showboat casino. A financial report issued by the DGE (Division of Gaming Enforcement) in July, 2014 indicates that the casino amassed more than $7 million dollars in gross profits. This financial report is in stark contrast to that of the other Atlantic City casinos slated for closure. Revel Casino and Trump Plaza not only haven’t been profitable, they also have demonstrated consistent losses.

For the past 27 years, Chris Ireland has served as bartender at the Showboat casino. His wife has been employed as a cocktail waitress. Chris told ABC News, “We never thought this would happen.” He went on to add, “They just want to eliminate competition. Everyone’s in favor of a free market until it doesn’t exactly work for them.”

Mr. Ireland is making reference to Caesars Entertainment, the group that owns the Showboat casino. Caesar’s strategy, according to Gary Loveman, CEO, is to reduce the total number of Atlantic City casinos. Supporting fewer casinos in the area is something Loveman believes is essential in order for the remaining Atlantic City casinos to stay viable.

Employees of the three Atlantic City casinos have been shaken by news of the impending closures. Staff at the Atlantic City Casinos had bought into the promises made when the casinos first opened. They believed that the establishment of these operations would mean viable, long-term, rewarding jobs for the community. Back in the 1980’s, Atlantic City had been dubbed the “Las Vegas of the East.” However, new gaming operations that sprouted up in New York and Pennsylvania took a big slice of the Atlantic City casino’s projected revenues. Since their inception, Atlantic City casino profits had plummeted from a high of $5.2 billion to $2.86 billion in 2013.

More casinos are expected to open in both New York State as well as Pennsylvania. This will take an even bigger bite out of Atlantic City casino’s future revenues. This inevitability has led financial analysts to advocate for contraction. The hope is that the eight remaining Atlantic City casinos will benefit from a reduction in local competition.

That a reversal of fortune is possible has been proven by Resorts Casino. Just last year, the Atlantic City casino reported a loss of $1.3 million. This year the casino is showing a profit of $1.9 million and is expected to boast even bigger profits in 2015.

Don Guardian, Atlantic City’s Mayor, offered his sympathies to those being laid-off. Acknowledging that the next few weeks will be difficult, he vows to continue to work towards establishing a greater balance between tourism and gambling to improve the city’s economy.